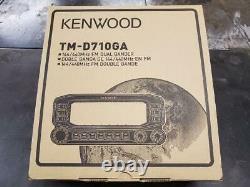 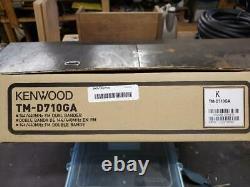 This requires the optional PG-5H PC interface cable kit. Simultaneous operation as an IGate terminal and/or digipeater is also possible while functioning as an EchoLink node terminal. When connecting the internal TNC to a PC for packet mode, a serial transmission cable (PG-5G) is required in addition to the PG-5H used for EchoLink Sysop mode. A program compatible with the APRS system has been developed with the cooperation of Bob Bruninga (WB4APR), the developer of APRS. By using this program and the GPS unit, various APRS operations are possible even without a PC. Messages can also be exchanged to share positional, direction/distance and weather information. TM-D710As may be used for remote control of KENWOOD HF transceivers, enabling the enjoyment of HF access even while making a quick trip to the local store. The HF band frequency is displayed, making operation easy. The large separate panel has a liquid crystal display for each key, enabling prompt access to a variety of functions. Two different mounts are included: one each for in-vehicle (panel-angle) and table-top (base-stand) installation. The LCD backlight color may be selected as either amber or green.

The device can emit a warning tone when warnings are announced on the NOAA Weather Band. Registered weather channels can also be scanned. The item "50 Watt Kenwood TM-D710GA 144/440 MHz FM Dual Band Mobiles TM-D710G" is in sale since Sunday, June 13, 2021.

This item is in the category "Consumer Electronics\Radio Communication\Ham, Amateur Radio\Ham Radio Transceivers". The seller is "gcbetty" and is located in Grand Canyon, Arizona. This item can be shipped to United States.