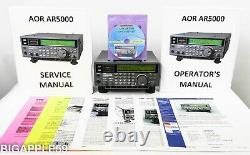 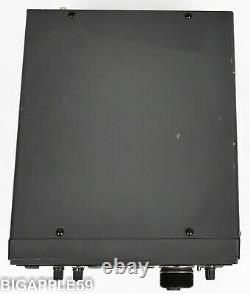 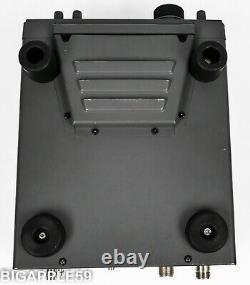 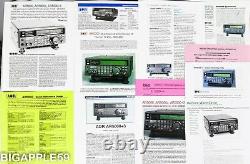 This sale is for a very high end wideband scanning receiver the AOR AR5000U receiver that has a heritage of powerful sensitivity and a bulletproof front end that resists overloading from nearby strong transmitters. Please note that this is this is the government version of the receiver with the suffix "U" designating that it is unblocked and offers continuous coverage from 10 KHz to 2600 MHz without any interruption. We show a picture of the typically blocked frequency band in our close-up of the display in one of the pictures at the top of this listing. In some respects, the AR5000 is the king of receivers. Because it offers both standard tuning and scan features, offers an exceptional array of operating modes, and does this over an incredible analog frequency range from 10 KHz up through 2600 MHz.

Thus, if you are a prepper who wants the best do all receiver in the shelter or if you are a person who admires a receiver that with a proper antenna and within range can literally hear most anything (short of government encrypted or digital signals), then this AR5000 is your receiver. Few receivers offer the combination of exceptional receiving frequencies, wealth of operational controls, and then put this into a highly configurable package. Electronically, the receiver operates beautifully with no issues or shortcomings as the main part of the receiver. As an example, when tuning most wideband receivers to the NOAA weather channels in our area, we can hear 3 different broadcasts.

Using this AR5000 receiver, we can actually hear 6 different channels. Yes, 3 of the stations heard were very weak on this receiver, but they are not even heard on other receivers that cover these same NOAA frequencies using the same discone antenna. Cosmetically, while the receiver is used and you will see a variety of marks from age and previous ownership. The front panel is in nice condition and the rubber "tire" on the tuning knob appears to remain in great condition. The original AOR bottom feet have been upgraded to heavy rubber feet that offer more secure slip resistance when pressing front panel buttons to operate the receiver. Please look closely at our pictures as we endeavored to take shots that allow you to see exactly what to expect to see in person when the AR5000 is delivered to you. Copy of the owner's manual.

WRTH 1999 review of AR5000+3 (World Radio and Television Handbook). Passport to World Band Radio review 1999. Finally, the new owner will get a CD that contains lots of useful files containing reviews, manuals, computer control software (no guarantee that it will work for your setup), and other information. There are a total of 448 MB of documents on this CD which contains files not commonly found and also no longer available.

This CD is not for sale as its contents were supplied freely via the many hobbyists over the years. The AR5000 was manufactured from 1996 until about 2008 when it was discontinued and the availability this receiver began to dry up. So what is it that makes this receiver so special? Well, in addition to its incredible span of receiving frequencies, it incorporates features not typically found in consumer grade receivers. One of these features is a wide band front end that uses electronic preselection between 500 KHz - 1,000 MHz and then uses low pass, band pass, and high pass filters for the other bands.

This means that unlike most VHF, UHF and high band scanners, the receiver is virtually immune to nearby transmitters that can often wreak havoc while listening on ordinary scanners. In fact, one of the reviews by amateur operator VK7ZJA on eHam tells about how he compares this receiver to other devices and how the AR5000 does not give him image issues. In other words, the receiver's front end is virtually bullet proof! Another thing not commonly found on consumer receivers is a very high grade TXCO fitted as standard giving the receiver excellent stability and tuning accuracy. Some users have said that the drift of the receiver is incredibly small over a range of operational time and operating changes such as temperature and this would make sense as it is rated at 1 PPM (part per million) over a temperature range of 32-121 degrees F (0-50 C).

There are multiple tuning steps available as presets or user programmed, but we appreciate that the receiver can tune in the fine resolution of a 1 Hz and does this by utilizing a NCO (Numeric Controlled Oscillator). When we listen to the radio, we often switch regularly between frequencies as we monitor broadcasts or if we want to see if a station is signing on or signing off. With most receivers, you are limited to a single VFO which means that every time you want to jump to another frequency, you have to re-tune the receiver in addition to all the other listening parameters.

This can be tedious if you are listening to ham operators and monitoring various nets or if you want to compare signal strength on shortwave of the same broadcaster on different frequencies and especially if you have to re-enter bandwidth, mode, etc. With the AR5000, you can program a frequency, tuning step, mode, IF bandwidth into each VFO so that you can save several steps when changing bands. For practical tuning, you can use one VFO for listening on the mediumwave band, another for 80 meters LSB, another for 20 meters USB, another for a favorite shortwave band, another for FM broadcast, and others for whatever your heart desires.

Thus, you can see the advantages of multiple VFOs for listening. One thing that we found when operating this receiver is the joy of discovery. Since we have had little total hands-on time with the AR5000, we realized that while there are many things in common with other receivers, there are many features not typically found.

With many receivers fitted with standard features only, after a few minutes of operation, our time focused on reception on the various bands and such things as sensitivity and ease of use. However, with this receiver, the basic features are easily recognizable and utilized.

But the more we read the manual or pushed buttons, extra options and features came to view. Like a TV remote control that has an assortment of buttons, this receiver has features that may be used seldom or never. The designers of the AR5000 wanted their product to be able to be utilized in a variety of environments, detecting everything from voice to code to data, and doing this with direct tuning, scanning, or computer control. The standard features are easily located and used without reading the manual, but it is advisable for the owner to study the manual so that they can get realize maximum advantage with all the features. Let us now make a list of some of the features of the AR5000 receiver. · Receiving range of 10 KHz to 2600 MHz. · 2,000 Memory Channels. · 6 IF Bandwidths 3 / 6 / 15 / 30 / 110 / 220 KHz. · Sensitivity from 1.8 - 30 MHz of.

With the AR5000, you have the 2100 pass frequencies that are not a part of memory so you don't waste memory channels to pass unwanted frequencies. This receiver is not a toy. With its fantastic receiving range, it has the capabilities of picking up the following types of analog transmissions if within range and with a good and proper antenna.

One of the best places to look and research receivers is eHam. This is because the reviewers are non-professionals so the information leans toward practical use and not lab testing. Some of the links are dead, but you can still get a lot of information from here. If you visited this site, you will find limited information, but at least you can find a link to download the manual and take a gander. We will do our best to try and answer them.

The item "AOR AR5000U Receiver Scanner AM / HF / FM / VHF / UHF. 01 2600MHz UNBLOCKED" is in sale since Saturday, October 9, 2021. This item is in the category "Consumer Electronics\Radio Communication\Ham, Amateur Radio\Ham Radio Receivers". The seller is "bigapple59" and is located in Mill Hall, Pennsylvania. This item can be shipped worldwide.