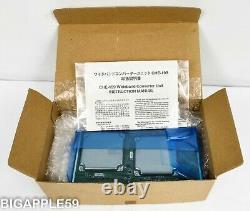 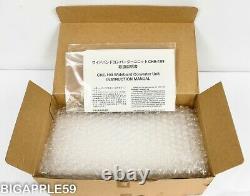 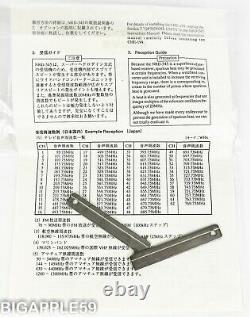 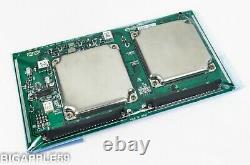 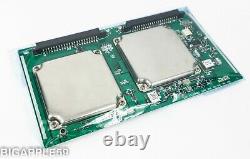 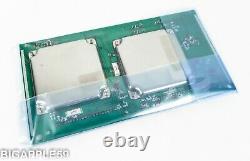 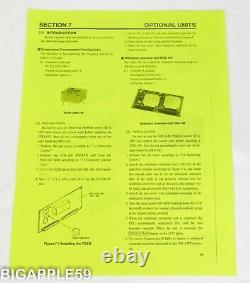 As you can see, offered for sale is the scarce Japan Radio CHE-199 module manufactured exclusively for the NRD-545 shortwave receiver. Everything is "as new" except that the box has a little damage with a slight depression and some marking on the lid. Often these CHE-199's were installed at the equipment dealer and the boxes were not passed along so having a box in any sort of condition is much less common. The CHE-199 comes along with the CHE-199 installation directions plus a set of board pullers which can be used with all JRC boards.

Installation will take about 15 minutes and requires you to remove 4 top cover screws, slide the module into the designated CHE-199 slot in the chassis and snap it into the bottom with a little push, plug in the RF connector that is attached to the upper antenna jack on the back panel, and then replace the cover. This is a non-technical installation and the only tool you will need is a Phillips screwdriver to remove the screws retaining the top cover of the 545 receiver. So what does this unit do? It takes the 545 that was designed for HF reception (and also longwave and mediumwave) and makes it a wideband receiver that some like to refer to as a "DC to daylight" receiver due to the frequency coverage. Thus, instead of the receiver's receiving frequency ending at 30 MHz as supplied from the factory, with this optional module, it will extend up to 1999,995.00 MHz.

Thus, the CHE-199 receiving range in the USA is 30-823.9, 849.1-868.9, 894.1-1849.9, 1910.1-1929.9 and 1990.1-1999.9 MHz. If you live in Europe and have one of the European NRD-545 receivers, there are no blocked frequencies and you will enjoy the full tuning range without interruption. In case you need a primer on what analog signals you may expect to hear within a receiving range and using a proper antenna, here is a list. Other emergency personnel & rescue. National Oceanic and Atmospheric Administration Service weather broadcasts.

Ham radio 10, 6, 2, 1.2 meters and 70, 33, and 23 cm (in addition to the standard broadcasts on the HF bands). TV analog audio channels 1 thru 69. GMRS (General Mobile Radio Service). FRS or family handheld units. Military emergency guard and strategic air command. To get reception outside the HF frequencies, you will need to connect a second antenna that gets reception on the VHF, UHF, and Microwave bands. However, many people get decent results with placing the discone inside in an attic. But the best antenna we have tested is the discone for wideband use and located as high and away from obstacles as can be reasonably done. However, if you want your NRD-545 to be able to tune from 100 KHz to 1999,995.00 MHz (less cellular) and be a "do-all" type analog receiver, then you will need to have this device to be able to accomplish that.

The item "Japan Radio JRC CHE-199 Module For NRD-545 Radio Receiver 30 MHz- 1999 MHz" is in sale since Friday, July 2, 2021. This item is in the category "Consumer Electronics\Radio Communication\Ham, Amateur Radio\Ham Radio Receivers". The seller is "bigapple59" and is located in Mill Hall, Pennsylvania.